Beating of the old Borough Bounds

On a sunny May bank holiday, a large group of people took part in the traditional beating of the bounds, following the old boundary of the Lostwithiel parish as it was in 1685.

Meeting at the Duchy Palace, the group started from the first boundary stone which was at the east end of the medieval bridge. John Pegg lead the walk and gave a historical background to the old parish boundaries. At each boundary stone (or boundary stone site), the Mayor Vic May and Mayoress Angie presented each walker with a penny, according to tradition.

Lostwithiel's boundaries were altered in 1935 and so the last time these stones were inspected by the townspeople was in 1926. Since that time there have been road widening and other disruptions subsequently causing some of the eight stones to become mislaid. Others that remained became overgrown in hedgerows.

Below is a list of all the 1685 boundary stones:

After the turmoil of the then recent civil war, Parliament decreed that there was to be some re-alignment of borough boundaries in England (Lostwithiel had two MPs elected from the borough to sit in parliament).
In 1685 or thereabouts granite stones were placed at prominent places on thoroughfares and crossing points at the periphery of the Lostwithiel borough boundary. Each stone was approximately one yard in length, one foot wide and eight inches in depth. All inscribed with the letter 'B' (for Borough or Boundary, possibly).
Below is an ordnance survey map from 1831 showing the old borough boundary: 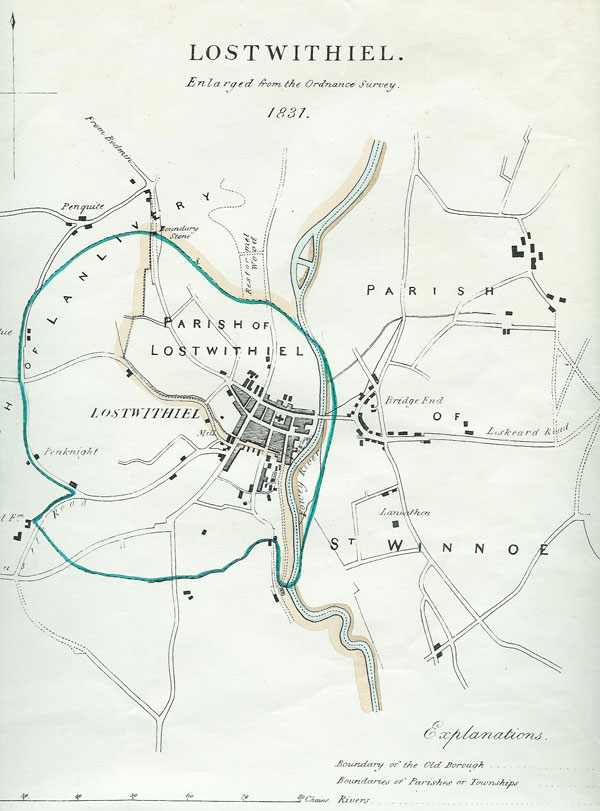