Lostwithiel is six miles from the south coast of Cornwall. Unlike the north coast's rocky coastline with wide expanses of sand and rolling surf, the south coast is characterised by small sheltered coves and secluded beaches. 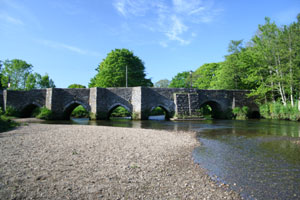 At low tide a small shingle beach is exposed near the medieval bridge.

With picnic benches and barbeques, this is an ideal spot for families with small children to build sandcastles and have a picnic or takeaway - fish and chips are always a popular option.

It's often buzzing with kids in shortie wetsuits, or kayaks and boats when the water is a bit deeper.

You can get tide times from the Fowey Harbour website (tide times are up to 30 mins later than Fowey for Lostwithiel).

If you want to swim in the sea or do some rock-pooling, there are several beautiful beaches nearby. 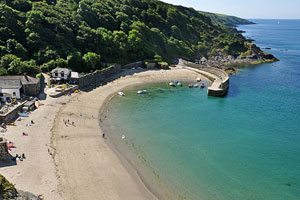 Polkerris is a tiny village with a small quay and sandy beach, accessed down a steep hill between Fowey and Par. The beach is owned and managed the Polkerris Beach Company. There is a slipway to the beach and it's a good spot for watersports.

The beach is very popular and the Polkerris car park can fill up in the height of summer. You can have a drink looking out to sea at the Rashleigh Arms or eat at the superb Sam's On The Beach in the refurbished lifeboat house.

From Polkerris there are stunning views across the St Austell bay. It is on the coastal path from Fowey to Par. 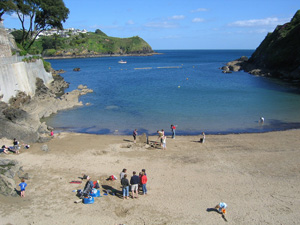 Readymoney is a lovely sheltered sandy beach. You can get to it by parking in the main Fowey car park and walking along the top of Fowey. There are stunning views across to Polruan as you walk along the Esplanade.  Alternatively you can drive to a nearby car park and have a short walk to the beach.

From the beach you can walk up to St Catherine’s Castle, a small fort built by Henry VIII, to enjoy spectacular views up the estuary and out to sea. The coastal path continues around the peninsula past Polridmouth, the Gribben Head Day Mark and eventually to Polkerris. 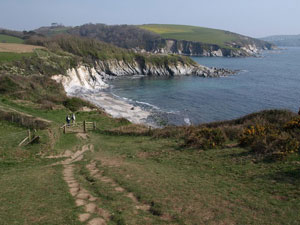 Polridmouth is a pleasant, secluded cove with two sandy beaches which are joined together at low tide. It is on the coastal path from Fowey to Polkerris. The Gribbin daymark looks over the bay.

Parking is at Menabilly where there is an honesty milk churn for the parking fee - head to Polkerris but instead of turning down towards the beach drive straight on till you reach the car park. Alternative you can park at the small National Trust car park next to Coombe Farm, at the end of Lankelly Lane in Fowey. Access to the beach is via a footpath from both car parks.

Menabilly House, on the Gribbin peninsula, was Daphne Du Maurier's inspiration for Manderley in her book Rebecca. 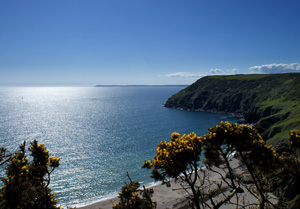 Lantic Bay is one of the best kept secrets on the Cornish south coast and very popular with locals for that reason. The bay shelters a white sandy beach with steep cliffs. It is on the coastal path from Fowey to Polperro.

To reach Lantic Bay, turn off the Lanteglos Highway, park at one of the two National Trust car parks and follow a footpath across fields and down a very steep track to the beach. For experienced mariners, an easier way to access the beach is by boat from Fowey.