Lostwithiel back open for business

Less than a week after the flash flood which devastated several homes and shops in Lostwithiel, as well as other towns in South East Cornwall, it's business as usual for all but the worst affected. The vast majority of shops are preparing for the Christmas rush and looking forward to Dickensian Night on Thursday 16th December. 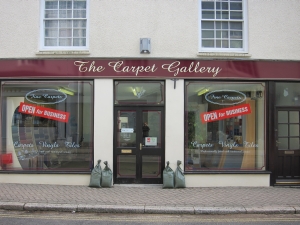 On Queens Street, the Post Office and Stick of Lostwithiel remain closed, but The Carpet Gallery has reopened and Fantasia Bridal has two other shops in Lostwithiel which it is operating from.

Along Church Lane, repair work has already begun at the Church Rooms and alternative venues have been found for groups which use the hall. Lost In Film will be showing their next film, A Single Man on 29th November, at St Bartholomew's Church. The screening will be BYO, with a small corkage fee towards Church funds.

On Quay Street, the Bakery and Harmony Beauty is closed until further notice, but Palace Antiques is back in business. Fore Street, where the main concentration of shops and busineses are based, escaped completely unscathed. 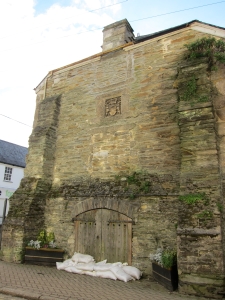 People living and working in the area at risk remain alert, with sandbags still outside many properties, but the greatest risk of flooding has now passed.

Insurance loss adjustors have visited most properties, where cleaning and repair work will now continue for a number of weeks.

The worst flood damage was along Tanhouse Road and its junction with the A390, and along South Street and its junction with Church Lane. The cause was the Cober which normally flows along Tanhouse Road, down into a culvert and then underground along South Street until it feeds into the Fowey. Following intensive heavy rain in the early hours of the 17th November, the culvert became blocked with debris, causing the Cober to burst its banks and flow along the streets towards the Fowey.

The Medieval bridge has also re-opened. After initial concerns that the 700 year old structure was at risk of collapse, the bridge was closed to vehicles and pedestrians until engineers could  check for weaknesses in the structure. It has now been given the all clear for traffic.

One notable change since the flood is that the river has altered its course around the bridge. Previously, the two arches above the river on the west side of the bridge, nearest the town centre, were extremely silted up and most of the water flowed through the other arches. The floodwater has scoured out these lefthand arches, allowing the river to flow much more evenly through all the arches. 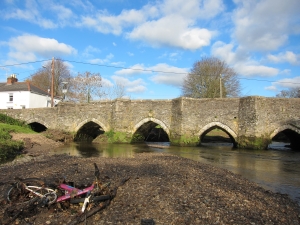 As can be seen from these pictures of the bridge, a great deal of silt and branches has been dumped on the river banks, along with other debris.

The clean-up operation has been so swift thanks  to the quick and co-ordinated response of Cornwall Council and the emergency services, but most of all because of the hard-work and generosity of so many people in the community who pitched in to help clear up the mess left by the floodwaters. 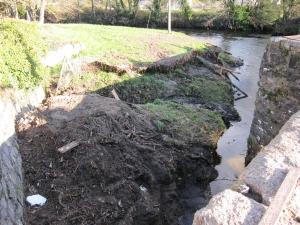