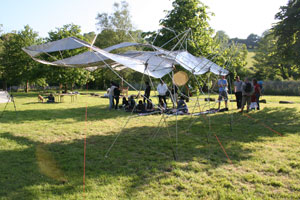 A group of 16 students from Chulalongkorn University in Bangkok, Thailand spent several days constructing an architectural project in Coulson Park in June.

The group will be entering their 3rd year of studying Architecture and are on a month long visit to Europe, spending their time between London and Paris. They visited Cornwall in order to visit the Eden Project which is famed for its architecture almost as much as its collection of plants. While in Cornwall they took the opportunity to build a structure which they had created for a project, in order to see it built in a rural setting. 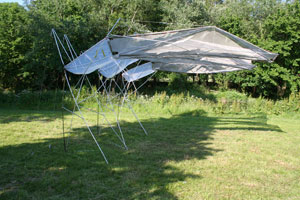 The project the students were set was to create a structure in 2 weeks that weighed less than 100kg and could fit into A1 sized luggage bags, in order to transport it from Bangkok. The students designed and fabricated all the parts of the metal structure, as well as the tools and the luggage.

They created 4 identical structures, each weighing 14kg and made up of 50cm and 80cm pieces of light steel and aluminum, metal mesh and guy ropes. Some problems were encountered with the flexible aluminum in the wind, and in the end only 3 of the structures were completed. 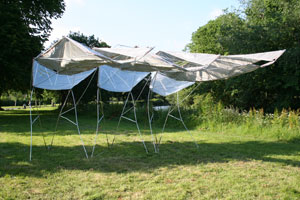 After their stint in Coulson Park, the structures will be exhibited suspended from the ceiling at the Old Truman Brewery Free-Range exhibition in London.

The structures aroused a great deal of curiosity and interest from regular visitors to the park.

The lecturers and students enjoyed their stay in Lostwithiel at the Royal Oak and Lostwithiel Golf Club. They were particularly appreciative of the help they received from residents, such as the loan of step-ladders to put the structures together.