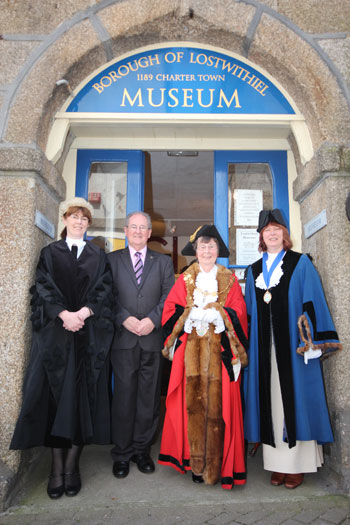 The new Mayor of Lostwithiel was chosen on 11th May 2012 at a ceremony held in the Guild Hall then in the Mayors Parlour.

Present in the Guildhall were guest mayors and mayoresses from Fowey, Bodmin, Saltash, Launceston and Liskeard, along with members of the public.

The Worshipful the Mayor Gill Parsons is pictured with Town Clerk Sandra Harris, Consort Donald Parsons and The Deputy Mayor Councillor Pam Jarrett, in front of the Lostwithiel Museum on Fore Street.