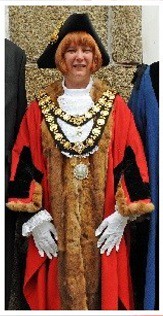 At the Annual Meeting of Lostwithiel Council on 16th May, the initial meeting of the new council following the election held on 4th May, the first item on the agenda was the selection of a new mayor and deputy mayor.

Councillor Pam Jarrett accepted the nomination for mayor and Councillor Tim Hughes agreed to be deputy mayor. As only one councillor put themselves forward for each position no vote was required.

Councillor Jarrett, who was Mayor in 2015/16, takes over the role from Ian Gillett who did not stand for re-election on 4th May.

News about the Mayor can be found on her new facebook page.