Lostwithiel Traders were recently featured in The Cornish Guardian and via Cornwall Live with this article written by Lisa Letcher on 19th June 2020.  See the original article for several photographs of the shopkeepers featured. 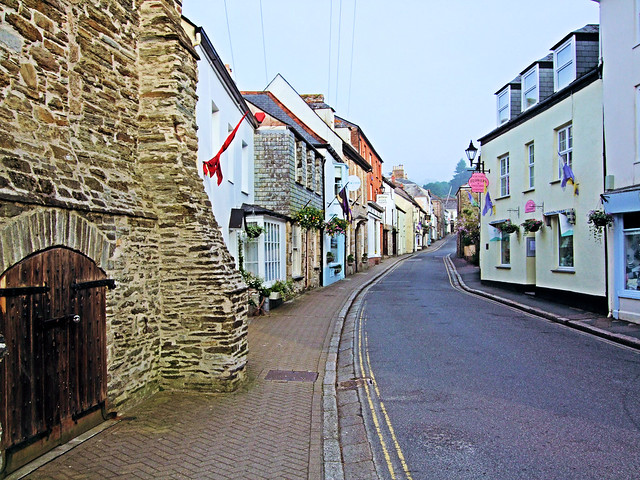 Things are looking up in Lostwithiel as the shops reopen

Over the past couple of weeks, shops across the county - big and small - have been gearing up for the poignant day when they would once again welcome customers in the physical form.

It is no secret that there are challenging times ahead as Cornwall's restaurants, pubs and shops have lost out on a large chunk of the seasonal trade they are used to.

But back with new measures in place and a shopping experience like we have never seen before, traders are more than ready to give their all to revive the local high street in Lostwithiel.

This week we spoke to some of the store owners who have reopened for the first time about what the future holds and why this whole experience could actually be a good thing for small town traders.

While lots of the smaller town high streets in Cornwall have deteriorated over the years, Lostwithiel is one of the few that rarely sees an empty storefront despite its somewhat hidden location and small population of less than 3,000.

Billed as the antiques capital of Cornwall - but offering so much more than that - people are just desperate to get hold of a shop in Lostwithiel and the two restaurants that unfortunately closed down due to the pandemic have already seen the premises' snapped up by new tenants.

But things are not perfect and while those who live here are optimistic, the shops are going to need some extra support this summer.

Ashley Norwood is the owner of White Lights on Quay Street. After running his fair trade gift shop and café now for over ten years in the town he has seen other retail premises come and go.
White Lights has still been open for takeaway during the closures but owner Ashley Norwood said the experience has definetely been a learning curve (Image: Lisa Letcher / Cornwall Live)

There is definitely some fear over the future, he says, but he is keeping his fingers crossed that everyone will pull through.

"We're all struggling for sure and not having the footfall is hard," he said. "Usually this is the time of year where we make the money that gets us through those quieter months and we haven't had the chance to experience that this year so fingers crossed we will get through this and stay running."

He added that while the support of local people is always fantastic, businesses really rely on the influx of external visitors that come with the high season to keep business going.

Cindy Ashbridge, who runs the jewellery store on Fore Street, first opened her shop almost a year ago in the town after relocating from a premises in Fowey.
Stay in the know

But she has spent the past few months working from her new studio at home.

She might have the smallest retail shop in the town, at only about 7ftx15ft, but has been thinking long and hard about how to make things work ahead of reopening this week.

"It's been really lovely coming back and just talking to the shop owners," she said. "It's been a good start and I have made some sales which is nice.
Cindy Ashbridge is pleased to be back in her Lostwithiel shop on Fore Street and has been busy putting procedures in place for the safety of customers including a perspex screen where she can pass dishes of jewellery through to the customer

"I think Lostwithiel has a really good chance of surviving this because if people don't want to go to busy towns that could really benefit us," she added. "After the first two months of worrying about it all I'm really pleased to be back here working."

Cindy has spent the last two weeks thinking how business will function moving forward, and like the other shops you can expect to see hand sanitiser on entry, limits to only one person in the shop at a time and a screen between her and any visitors.

She is also offering pre-bookable time slots so that people don't feel rushed and have the chance to enjoy their shopping experience in a safe enivornment.
Cindy will be disinfecting each piece of jewellery before the next customer (Image: Lisa Letcher / Cornwall Live)

"It feels right for me to operate on a one-to-one basis like that," she said. "It can take a lot of time in the jewellery business, especially with commissions. People want to really talk to you, look at the products and feel them and you want to make sure that person is safe and comfortable."

She will also be focusing a lot more on her window displays, ensuring that things are labelled and people are able to browse more effectively before choosing to step foot in the store.

"I think if I was working in a big town like Newquay where it was busier, I would feel nervous about reopening," she said. "But Lostwithiel feels really local."

Vicki Carver and Lita Elliot are the women behind Choughs, a shop that offers furniture up-cycling, painting and a coveted space for local crafters to sell their goods.

Vicki says that she is pleased to return to the shop but that strange times are ahead for them and the 30 other traders who rely on the store to sell their artisan products.

"It was a major shock," she said. "And all the stuff we make we sell quite cheaply anyway so there isn't much profit in anything we do, but really, to come to a full stop was a real shock.

"I think people are still very cautious about going out," she said. "We're going to take it step by step, literally day by day and look at the bigger picture and see where the virus takes us all.
Choughs is home to handmade and artisan products from around 30 local crafters (Image: Lisa Letcher / Cornwall Live)

"We love being here and having this shop but if we're making no money at all we will have to have a tough conversation but we are all staying really positive."

Denise and Tom Watts have been selling an array of things at Watts Trading for the past 14 years and say they are hopeful for the future because they love interacting with customers and are not the biggest fans of online shopping.

"In a couple of weeks I think people will really be moving about," said Denise. "So we are getting things in place ready for that but you can really do yourself a disservice by worrying about these things. I think we really just have to have faith that it's all going to be okay."

They have been open by appointment throughout the pandemic because they sell a lot of refillable cleaning and toiletry supplies but admit they are pleased to have the doors to the shop open once again.
Denise says she has missed the interaction with customers and has never been a big fan of selling online

"None of us know what's going to happen to retail and an awful lot of people have been buying online but we don't have an online option because we love the interaction with people," she said.

"That's what local shops do for people. They come in and buy their honey or hand wash or whatever and have a little chat and it makes the buying experience a real experience rather than just spending your money."

Tom added: "I do think people are going to feel safer coming to small places like here rather than going to Truro or Plymouth."
Denise and Tom Watts of Watts Trading have been running their business in Lostwithiel for 14 years now

Just ten days after opening the shop on Queen Street in March she had no idea she would be closed down until reopening this week.

Suzette and her husband Mark had a trip planned to New Orleans in March, where she is originally from, and ended up stuck there for two months as the lockdown was put in place in the UK.

"I put blood, sweat and tears into this shop," she said. "And I've been working furiously to get things done now that I hadn't had a chance to get done previously.

"It's been quiet, but as of yesterday I have had people drifting in to see what's open and what's not," she added.

Adrian Barrett and his wife Marianne run Déjà-Vu Antiques, which also reopened this week after a period of closure.

"It has been really nice to be open again," said Adrian, who is also the town's business group chairman.

"At least a third of the businesses in Lostwithiel are hospitality businesses so we won't be seeing them all reopen just yet, but we really are hoping that people have got a little more used to shopping in their local town.

"I can see how it would be a bit daunting initially for people to pop into a shop and ask for something or visit the local butchers when you are not used to it, but people have really got used to supporting local and that's really nice to see."

In terms of opening the shop up again to the public he said that they are being as flexible with customers as they can to make them feel at ease.

"We have masks if people would prefer us to wear one, we are offering individual appointments for people because some people will have been shielding for months and not have left the house," he said. "We're never deluged with people here so it's easily managed but we will have to see how things develop as time goes on."