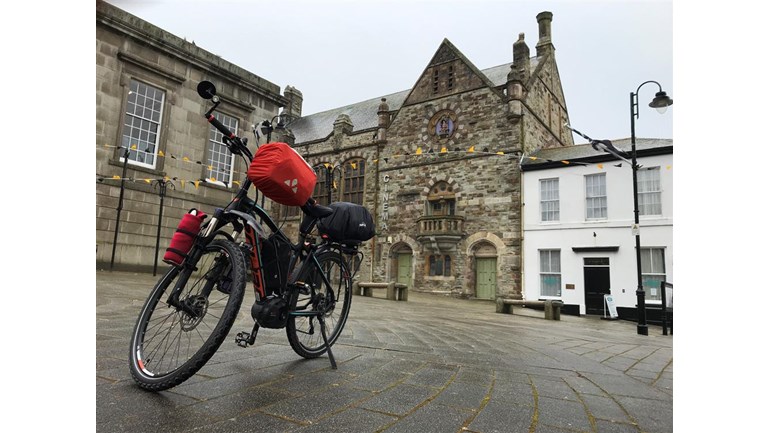 Lostwithiel resident Nick Warwick is travelling on an electric bike to visit his grandchildren in Aberdeen. With 985 miles of idyllic English and Scottish backroads to explore, Nick is both excited and a little bit nervous.  He just hopes that his knees will take it and that he doesn’t don't break any more limbs on the way.

Averaging around 65 miles a day, the journey will take 15 days, with a couple of rest days in between.  Nick was joined by his friend Clive Littleton for the first 4 days and will be joined by his son Daniel Warrick for the run in to Aberdeen on day 17.

Some people have been polite enough to feign interest and they have asked to be kept updated. Progress may be followed on TrackMyTour   Just click on the link to see where he is and what he has have been up to (maps, words and pictures).

A few especially kind people have suggested that Nick should raise some money for charity and that they would be willing to sponsor him.  He has created a JustGiving page at https://www.justgiving.com/fundraising/nick-warrick

Nick has chosen Marie Curie as his charity because his wife, Jo, who was a nurse, greatly admired the work that Marie Curie nurses did.  Nick has also have several family and friends who have experienced life limiting scares and he wants to help people who are having to cope with experiences like those.  Just follow this link if you would like to contribute.

Anyone interested in the route that Nick is taking can find details here.