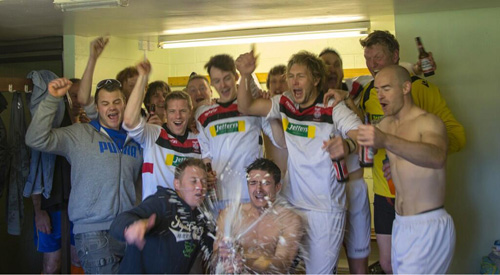 Lostwithiel FC have been promoted to the Duchy League Division 1 after a hard fought game against rivals North Petherwin on 20th April in their last game of the season. The team, managed by Graham Rule, played at home on KGV field in Lostwithiel and the celebrations continued at the King's Arms in the evening. The win gave them the 3 points needed to get the runners up trophy and promotion to the next division.

The presentation evening will be held at Lostwithiel Golf Club on 24th May. Tickets are £25 for a 3 course meal followed by raffle, awards, entertainment by Kernow King and disco. More details here