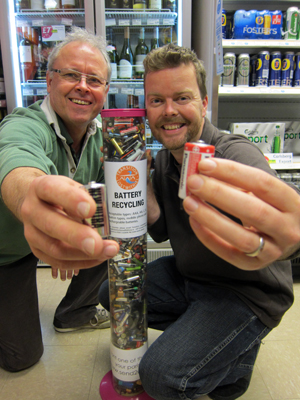 Batteries recycled in Lostwithiel as part of a Transition Lostwithiel project have just passed the 500kg mark. A battery recycling tube was installed in Lostwithiel Londis by the group in July 2008, funded from community donations and contributions from Cornwall Council and Sita. Lostwithiel Londis owners Jeff and Julie Manwaring kindly made space in their busy shop for the tube and it has been filling up with about 15kg of dead batteries each month ever since.

The batteries are taken by Transition Lostwithiel volunteers to the Connon Bridge HWRC for recycling, as part of a scheme run by CoBRA, the Community Battery Recycling Alliance, in co-operation with Cornwall Council.

Thanks to everyone's help in Cornwall, the scheme has helped recycle over 50 tonnes of batteries. According to Mark Hatwood, creator of CoBRA, in its two forms (recycling light bulbs and batteries) the scheme has won 6 national awards and was voted No. 8 in the 'Trailblazing Newcomers' list of the top 100 Social Enterprises in the whole of the UK last year.

Transition Lostwithiel is a local group committed to building links within the community and learning about sustainability. Member Kat Smith said "500kg is an impressive milestone in Lostwithiel's battery recycling. It might not seem much compared to the waste collected each week but it's half a tonne of toxic metals which have been diverted from landfill. You can find battery recycling boxes in many locations these days or you can take batteries straight to an HWRC for recycling, so this is only a fraction of the recycling effort that goes on."