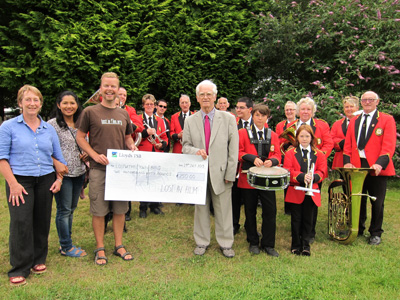 As Lostwithiel Town Band prepared to take part in the Lostwithiel Carnival Parade on Saturday, they were presented with a cheque for £250 by Lost In Film, the Lostwithiel film society. The money was raised at a special screening of Quartet, a film about a retirement home for musicians starring Maggie Smith, Billy Connolly, Tom Courtney and Pauline Collins. There was a full house for the event and the audience were treated to pre-show operatic singing by Rev. Phillip Conway accompanied by Robert Christie on piano.

Bandmaster Denzil Stephens accepted the cheque on behalf of the Town Band and thanked Lost In Film for the money, which will be spent on repairing band instruments.

The donation is the latest in a series of fundraising events held by the community cinema, which regularly raises money for local groups and charities as well as providing equipment for other groups to do so. In July the Lostwithiel Cancer Research group held a sing-a-long Mamma Mia screening which £300 raised, while in January nearly £600 was raised for Lostwithiel Skate Park Project at an illustrated wildlife talk. In the last year, Lost In Film has also raised money for Lostwithiel PreSchool, St Barts Church Hall and Rotary charities.

Chairman Mat Connolley said "We love showing films and we're hugely grateful to our audience for supporting us by coming to see them. It's great getting feedback about the films they've loved - or hated! As we're a not-for-profit group we donate to as many good causes as we can, so we're thrilled to support the Town Band. No event in the Lostwithiel calendar would be the same without them."

Lost In Film will be celebrating their 5th birthday in September and are planning a series of celebrations to mark the event, including free screenings and further donations to local groups and charities.