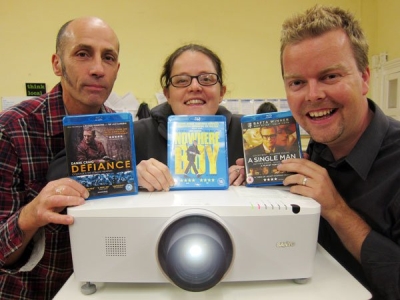 Lost In Film has been awarded grants totalling over £10,000 to buy its own film projection equipment.

£5000 was awarded by Cornwall Community Foundation's Grassroots Grant fund and £5653 was awarded by Big Lottery Fund to buy a projector, screen and audio system. Until now Lost In Film has hired projection equipment from Carn to Cove, based in Redruth.

This equipment will allow Lost In Film to hold further screenings in addition to its regular screening on the last Monday of the month, as well as more unusual and special interest films. It has already been used for a very successful outdoor screening in August of the 1969 Italian Job, which was held in conjunction with Lostwithiel Rotary to raise funds for their Kosovo Appeal.

The equipment is available for hire by individuals, business groups and Lost In Film hopes it will be used by other local film clubs or societies. The projector, screen and surround sound system is excellent quality and would be suitable for audiences of up to 300 people.

Chairman of Lost In Film, Mat Connolley, said "We're over the moon to finally have our own equipment. Our audiences always give us suggestions and feedback, so we're now able to show more diverse films. The equipment doesn't just have to be used for showing films - it's suitable for anything from horse-race nights to birthday parties, illustrated talks or just as a PA for live music."