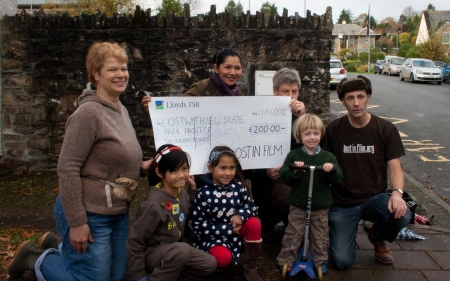 On 24th September Lost In Film, the film society in Lostwithiel, opened its 5th season with a fundraiser screening of Best Exotic Marigold Hotel. All profits from the night plus were donated to the Lostwithiel Skatepark Project. The film was a sell out success, with tickets sold out several weeks in advance of the screening. A short film about the suggested Skatepark was shown before the main feature and generated a great deal of interest. Including donations from the audience, the event raised a grand total of £200 which will be presented to Helen Taylor of the Skatepark Project on Sunday 11th November.
Lostwithiel Skatepark Project has been set up to replace a worn out but well loved timber miniramp with a new, more sustainably constructed facility to be enjoyed by people with skateboards, scooters and BMX bikes. Local support for the project has been strong with regular fund-raising events held in the town, ranging from Bingo nights to jumble sales and car washes.
The group is well on its way to raising the local target of £20,000 towards total project costs. £15,000 has been promised by the Town Council and Lostwithiel Educational Trust, leaving £5000 to be raised by local effort. Donations have already been received from Pennon Group, the Duke of Cornwall Benevolent Fund,  The Dulverton Trust, Transition Lostwithiel and the Lostwithiel Business group. The total cost for the project is expected to be £70- £100K.

Lost In Film is run by volunteers and regularly holds fundraising film nights. Films are shown in the Church Rooms, Lostwithiel and details of all films are on lostinfilm.org.uk. Next up will be the classic ghost story, The Woman in Black (12A), on Monday 26th November followed by family favourites The Muppets (U) on Friday 28th December.