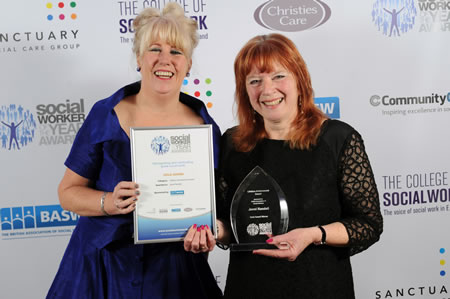 Lostwithiel resident and independent social worker Jenni Randall has been awarded a ‘Lifetime Achievement’ award (recognising those who have spent more than 20 years in the profession).

The winners of the 2013 Social Worker of the Year Awards were unveiled on Friday 29th November at a presentation which took place at the Lancaster Hotel in central London. Over 300 guests attended the event, which saw 13 awards presented to individual social workers, and social work teams throughout England.

Jenni was nominated for her award by a former client, television producer David Akinsanya, who joined forces with her former colleagues at the Corve Lane community home in Essex to make the nomination.

"I've worked with David as a social worker since he was seven. He was one of the first children on my caseload and we've remained in touch ever since," she said. "The fact the nomination comes from former clients means I've been doing something right."

Jenni currently works as an associate at David Niven Associates in Plymouth and still does part-time independent care work and social work training.

Read the Cornish Guardian article for full details of the nomination.