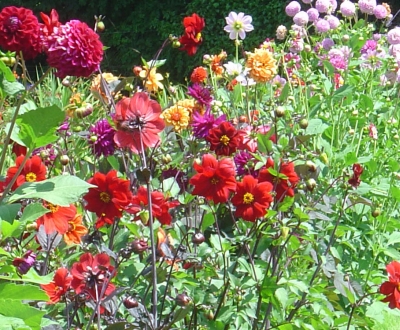 A successful opening under the National Garden Scheme has been held at Hidden Valley Gardens, near Tywardreath. Over £1,000 was raised for such charities as Macmillan Nurses, Marie Curie, Cross Roads Care and Help the Hospices. Visitors came from near and far, including Australia , South Africa and the Far East. Thanks to all who came.

The colourful borders/beds and cream teas/homemade cakes were enjoyed in the reasonably pleasant weather. Children were entertained with a Children’s Quiz/Treasure Hunt with prizes for all ages. One Japanese visitor took over a hundred photos of the colourful Asters, Crocosmia, Agapanthus and Dahlias and, in accordance with Japanese tradition, had a family photo taken in front of the Tea Hut.

The garden remains open until mid-October except Tuesdays and Wednesdays. Pick-your-own Autumn raspberries are now available.