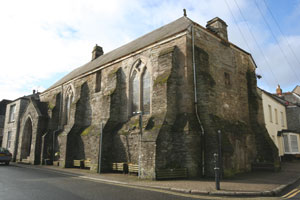 Renovation of the Duchy Palace, the remaining part of the ancient Stannary Parliament buildings in Lostwithiel, is due to start in December 2011 after a £1 million restoration fund was recently approved.

The Grade I listed building is possibly the most important secular building in Cornwall and is already listed as "At Risk" by English Heritage. The renovation will remove it from this list and preserve it for many years to come, with the inside being used for a mixture of office, community and retail purposes.

A partnership between the Prince's Regeneration Trust and the Cornwall Buildings Preservation Trust is responsible for securing the £250,000 of European money which allows the restoration to go ahead.

Building contractors Carrek Ltd have been contracted to carry out the work. Simon Thorpe, chairman of the Cornwall Buildings Preservation Trust, said that the contractors have a long track record of doing similar projects in Cornwall.

The Duchy Palace originally reached along the town quay as far as the cobbled archway at the end of South Street. All Cornish affairs and the tin industry were controlled from here, including the Courts, Treasury, Maritime offices, the Stannary Parliament, smelting, coinage and assaying of tin and the stannary prison. The complex was badly damaged by Parliamentary soldiers during the Siege of Lostwithiel in 1644. The Convocation Hall at the corner of Quay Street is the best preserved part of the complex and carries the emblem of the Black Prince (the first Duke of Cornwall) at the apex of the northern gable.