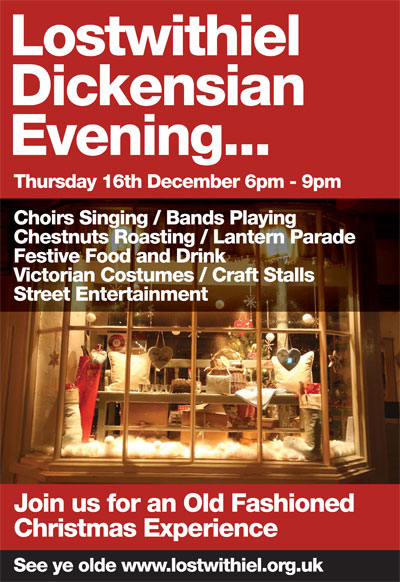 On Thursday 16th December from 6pm to 9pm Lostwithiel will play host to its ever popular Dickensian Evening.

This year, in addition to the  late-night shopping and shopkeepers in Victorian garb, choirs, bands, craft stalls,  roasting chestnuts and lashings of mulled wine, there will be a lantern parade to kick off the evening at 6pm.

Last year's Dickensian Evening was filmed for Rick Stein's Cornish Christmas, which will be shown in two parts on 2nd and 9th December on BBC2 from 8:30 - 9:00pm.

In addition, visitors will be treated to festive scenes in the  annual Advent Window Trail and Christmas trees along the streets.

So come along and get in the festive spirit for an Old Fashioned Christmas experience.

The evening will include the following entertainment: