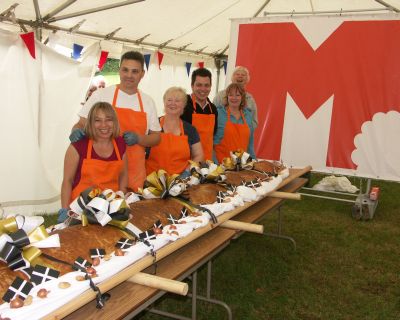 Lostwithiel Bakery took part in a Best Pasty competition which was run by Monster Munchies, a  Good Food channel TV programme which will be aired weeknights from Monday 8th November at 10pm.

The Best Pasty competition was judged on three criteria: taste, size and presentation. There were 5 judges and Lostwithiel Bakery excelled on presentation, but in the end lost out to Proper Cornish in Bodmin who had a special large oven purpose-built for the competition.

The team at Lostwithiel Bakery had a Peeling Party the evening before the competition, in preparation for the event. Owners Christine and Barry, along with Pauline, Andrew, Jenny and Sue, peeled their way through 4 bags of potatoes as well as swedes and onions to make the monster pasty. Lostwithiel florist Country Flowers provided ribbons to decorate the pasty, which was so large it had to be baked in sections.

Monster Munchies has been running similar super-size competitions up and down the country to celebrate Britain's classic dishes. There has been a Battenberg competition in Windsor, a Bakewell competition in Bakewell, a cream tea competition in Devon, and a  pork pie competition in Melton Mowbray. Filming in Lostwithiel took place on 19th August, the day of the Fowey Regatta.

The programme is hosted by ex-England rugby player Matt Dawson who has appeared on the BBC quiz show A Question of Sport.

Visit the Good Food channel for more details about Monster Munchies or find out more about Lostwithiel Bakery.