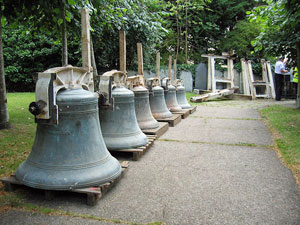 Since 1995 the Friends of St Bartholomew's Church in Lostwithiel (FOSB) have raised over £100,000 for this Grade1 listed medieval Church.

This fund-raising has paid for projects such as restoration of the church roof, renovation of the Tower and Spire and re-hanging the Bells amongst many others.

You can read full details at the FOSB website.

On 2nd July 2009, Captain of the Tower, Simon Brewer with his team of volunteers lowered the six bells so that they could be taken away for refurbishment and then replaced in a new frame.

The bells were lowered in time for the royal visit on 4th July, which meant that the Duke and Duchess of Cornwall could inspect the bells and their old frames.

Simon Brewer explained the refurbishment process to the Duke and Duchess when the visited the church as part of their Royal visit to Lostwithiel. 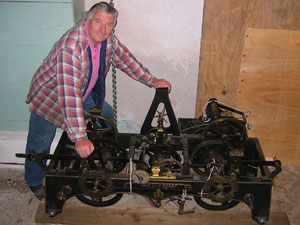 The manufacture of the new frame and related refurbishment was being carried out by the specialist bellhanging company, Nicholson Engineering Ltd.

The church clock at St Bart's belongs to Lostwithiel Town Council. Robert Peareth, in his capacity as Deputy Mayor, came along to affirm the Council's ownership before the clock was removed for refurbishment.

On 9th July 2009 work began on removing the clock, the bells and all their supporting ironwork. The bells needed to be refurbished because the supporting steelwork to hold them aloft had corroded. 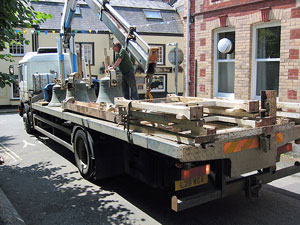 The clock, bells and their supporting framework all had to be loaded onto a lorry and taken to the bell hangers works for refurbishing. The lorry had its own crane which made loading easier.

In September the ringers organized a special party to visit the Bell Hangers in Bridport. The six bells from St Bart's had been fitted with refurbished headstocks and new bearings. 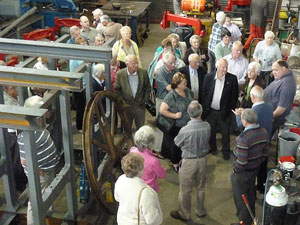 Andrew Nicholson outlined the work being carried out. The steel joists that had been supporting the cast iron bell frames had been found to have rusted to an alarming degree and new joists were being fabricated and would be cleaned and hot galvanised before delivery. The heaviest bell weighs 9 cwt (nearly half a ton). The visit was greatly appreciated and enjoyed. 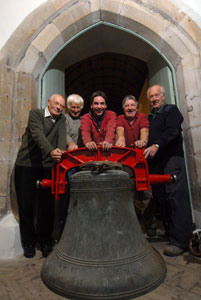 On 26th October the bells returned. The lorry had an integral crane and the driver lowered each bell carefully. Crucially the bells had to be marshalled in the aisle of the church in the correct sequence for subsequent installation in the tower.

In the bell chamber the sockets in the wall where supporting steelwork will rest have been re-cemented and aligned. The work of assembling the steel framework and the heavy iron castings has to be carried out in this cramped space. Hopefully the installation will last another eighty years or more. 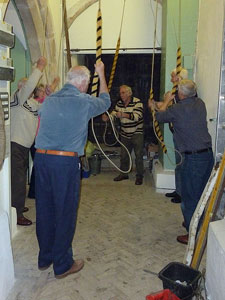 For the next ten days Mark Pring, Simon Brewer and their team worked on re-hanging the bells, heavy work in confined spaces.

On 5th November the bells were ready for their first trial since their refurbishment. All that remained to be done was to get the clock connected to its hands and to get the strike and chime hammers aligned to the appropriate bells.

The sky was illuminated with the occasional bursting firework when the bells started ringing again at 7:45 hrs on Thursday 5 November.

Words and some images adapted from the FOSB website.

Picture of FOSB team around bell courtsey of The Cornish Guardian.

Pictures of Duke and Duchess of Cornwall © Pure Picture Company.