Three local businesses have won awards since the start of the year.

A Little Bit of Heaven

A Little Bit of Heaven, accessible holiday accommodation in St Veep near Lostwithiel, has been awarded Silver in the Access for All category of the South West Tourism Excellence Awards 2013-14.

The category is sponsored by Tourism for All, a national charity dedicated to making tourism welcoming to all.

The South West Tourism Excellence Awards ceremony was held in Plymouth on 30th January, with 66 different awards being announced following a record 350 entries.

A Little Bit of Heaven is a 43 acre rural enterprise at Manelly Fleming Farm in St Veep, owned by Daphne and Peter Rolling. It has been in the Rolling family since 1946 through three generations and is still a working farm, breeding top quality piglets, calves and chicks. They offer visitors fresh air and countryside, the chance to enjoy a meal outside in the gardens or a rest by the lake - it's the perfect place to relax and recharge.

For the sixth year in a row Eden Valley Holiday Park has been voted as one of the Top 100 Sites in the UK for 2014. The coveted awards compiled by Practical Caravan, Practical Motorhome and Caravansitefinder.co.uk recognise the efforts of site owners and staff to provide their visitors with great holiday experiences.

Eden Vally Holiday Park are busy making improvements to their site over the months in time for opening on 1st April. 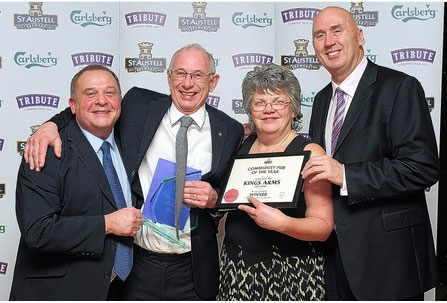 For the second time in four years, the King's Arms in Lostwithiel has been declared St Austell Brewery's Community Pub of the Year.

Publicans Mick and Kath Townsend collected the award at the annual Tribute Estate Awards ceremony held at the Great Western Hotel in Newquay, which was attended by 300 tenants, managers and staff from St Austell Brewery pubs and hotels across the region. They have run the pub for the last 7 years.

A total of 18 awards were handed out in categories celebrating individual excellence in the quality of food and drink, accommodation, customer service, training and marketing, as well as special awards for managers and tenants of the year.

Last summer, a team from the Kings Arms raised £5,211 for good causes when they trekked 70 miles from Morwenstow on the north Cornwall coast to Lostwithiel. Kathy says "I think we won the award because basically we just have really nice customers, who not only support our fundraising efforts, but support the activities and events we put on, whether its live music, folk and bluegrass jam evenings or our quiz nights. Mick and I just do what we do, and its our customers who have to be thanked really.''