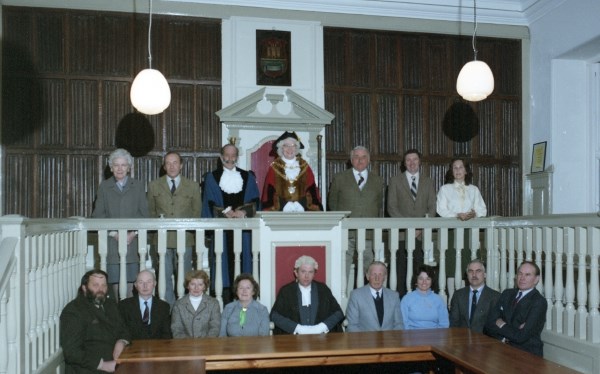 Only six of the existing councillors are standing for reselection - David Guiterman,  Karin Henderson, Tim  Hensman, Tim Hughes, Pam Jarrett and Karen Ross. A full " STATEMENT AS TO PERSONS NOMINATED" for Lostwithiel Town council is available from Cornwall Council.

On the same date there is also an election for one councillor to represent Lostwithiel on Cornwall Council. Three candidates have been nominated:-

NOTE:  Image at top of page is from over 30 years ago and shows Lostwithiel Mayor Gwen Powell-Jones and fellow town councillors pictured in The Guildhall in January 1986.  Currently The Guildhall has been out of use for over 17 months. The last full council meeting was held in the building on 20th October 2015.  Photo from Jonathan Barker Collection via  http://cornishmemory.com